It’s not that Toby Whithouse is a shit writer necessarily. He’s not. He’s turned in some great scripts in his time. School Reunion was delightful. As was The God Complex. The Vampires of Venice and last season’s Under the Lake/Before the Flood were enjoyable. Even A Town Called Mercy was good in parts, if a bit dull. But watching this made me grateful that it’s Chris Chibnall who’s getting the showrunner gig after Moffat leaves, and not Whithouse, even as I’m beginning to regret even Chibnall’s appointment. It really was quite a shambles, and a dishonest and patronising shambles at that.

Don’t get me wrong. This was fun, if nothing else. It’s watchable. It has its tickly moments interspersed between the disappointing failure to successfully execute anything remotely approaching an interesting idea. The monks subjugating the human race by beaming fake news into everyone’s brains. That was fun. The Doctor bloviating, very convincingly, at Bill about how the election of Donald Trump has reduced him to supporting a malevolent alien domination of the human race. That was very fun. The Doctor faux-regenerating. Fun. Missy lying atop a grand piano and batting her heavy lids at the Doctor as he bounces ideas off her. Fun. Nardole. Much fun. Very amuse. And “fun” is something at least. One of the most important considerations when I’m mulling over my opinion on a Doctor Who episode for these reviews is “Aside from everything else, did I enjoy watching it?” But “fun”  isn’t enough. Because The Curse of the Black Spot was “fun”. Victory of the Daleks was “fun”. But “fun” didn’t stop those episodes from being eminently forgettable. 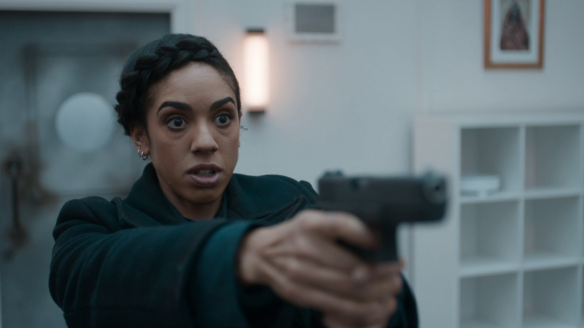 No, this episode’s real failure was that it had so much potential and so many interesting ideas to play with, but that it supremely failed to do anything interesting with them. The story we were teased with in trailers and synopses, and the story this episode looked like it was going to tell for the first fifteen minutes, was genuinely interesting. The entire world, including the Doctor, has been brainwashed by alien invaders and only Bill can see the truth. That was interesting. That was outright riveting. So why didn’t we get it? Moffat and/or the BBC knew that that story was far more interesting than “the Doctor and Bill attempt to overthrow an alien occupation”, which is why the former, not the latter, was the story this episode was sold as in all the promotional material. Instead, the episode abruptly dispensed with the story it knew was the more interesting idea after fifteen minutes and proceeded inexplicably to tell a hackneyed story about the Doctor and Bill boringly leading a boring resistance against the boring Monks, with Missy thrown in for unnecessary good measure (Missy was still delightful, though, don’t get me wrong).

And it really was quite brilliant for fifteen minutes. The bleak, soul-crushing oppressiveness of the Monks’ take on 1984 was captured really well. The way the human race was subjugated through mind control, the way the monks have been manipulating humanity’s memory of its history, the Doctor’s chilling propaganda broadcasts—it was all done brilliantly (god, that was such a promising pre-titles sequence). And the climactic confrontation between Bill and the Doctor on the prison hulk? Wow. That soared. Pearl Mackie and Peter Capaldi were at their ecstatic, spellbinding best, and I’ve no hesitation in calling it one of the best scenes of Series 10 so far, if not of the Capaldi era. I didn’t even mind the faux-regeneration. Unnecessary and frivolous, perhaps, but it was the exhilarating climax of an incredibly emotional and captivating confrontation between the two leads, and it worked. It’s just a shame it was the rude segue into the much more mundane remaining two-thirds of the episode, rather than its climax.

But the other good idea this episode failed to follow through on was any conception of the Monks as anything other than nondescript alien occupiers. Sorry, I know I praised how the Monks were portrayed last week, but they’re back to being boring again this week. I’ll admit that the mind control was cool. I’ll admit that the idea of the Monks ruling the Earth by beaming fake news into everyone’s heads was cool, and it might have made for a much better episode if it had been given some proper exposition and worldbuilding. But the thing is, you could literally substitute any other hideous-looking alien race for the Monks in this episode, because the Monks in this episode bore next to no relation to the Monks from Extremis or The Pyramid at the End of the World. They had precisely zero lines, and I can’t help thinking that Whithouse wasn’t really interested in writing a story about the Monks Steven Moffat had conceived, but was rather just using the Monks as convenient placeholder aliens for the story he really wanted to tell (unsuccessfully) about 1984 with mind control. As Phil Sandifer justly pointed out, the Monks who control the human race through mind control have no conceptual connection to the Monks who create elaborate, faultless simulations of the Earth and all the people in it in order to determine the best way to conquer it.

What exactly happened to that idea anyway? It was nowhere to be seen in this episode, and the simulation technology was used for a completely different purpose in the previous episode. I still don’t know why the Monks didn’t, as we were led to believe they would, just use the information gained from their simulations to determine the most effective way to conquer the Earth, and then go ahead and conquer it. I don’t understand why they bothered with fiddly psychic links if they could literally just conquer the Earth. And I don’t understand why their simulations didn’t see that their mind control technology wasn’t going to work on Bill, and that as a result she would be their downfall. That’s because it didn’t make sense. Each of Steven Moffat, Peter Harness and Toby Whithouse were writing about a slightly different villain in slightly different stories, with the result that the whole is disunited and incoherent. Not so much a chain novel as a game of Chinese whispers where the thing ends up a completely different creature from what it started out as. 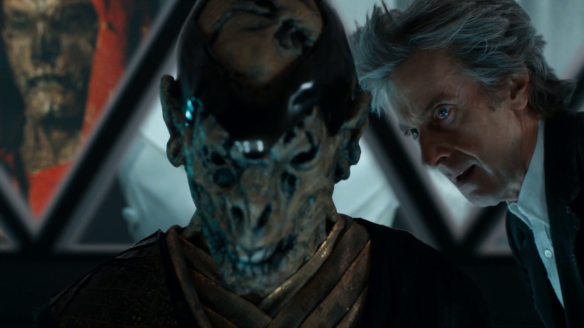 The other result of the inconsistent writing of the Monks was that the story actually omitted to tell us who they were. We were told all about their great powers and what they could do, but nothing about who they were and what they wanted. Why, exactly, were they interested in ruling the Earth? One does not simply decide to subjugate an entire planet because one feels like it. If one was to go to that much trouble one would be expected to have a good reason. But it really did look like they conquered the Earth out of either whimsy or a sadistic desire simply to oppress. It didn’t look like they were taking advantage of their absolute dominion of the planet by, you know, picking some less Spartan living arrangements or anything absolute rulers would be expected to do with their absolute power. Given that they didn’t speak in this episode, we’ve really got nothing else to go on. Nor were we told who they were—there were some interesting seeds of ideas, like what they said about taking the form of corpses because, to them, humans look like corpses. But nope, nothing. We’re left to speculate.

I haven’t even mentioned arguably this episode’s biggest sin yet, which was that awful resolution. Look, I’m not one of those tedious fans who retch at any suggestion of feels and sentimentality in Doctor Who. Anyone who’s read my reviews before could tell you that that’s absolutely not me. I usually revel in the feels and frequently rebuke the show for not being sincere enough in its deployment of emotion (see my review of Face the Raven). But emotionally-driven resolutions actually have to mean something to work. There has to be some measure of emotional investment put into them to get the narrative and emotional dividends. You can’t just throw them in wherever you want as a convenient narrative cure-all that excuses you from actually coming up with an intelligent resolution. This was the laziest and most undercooked use of the already overused “power of love” resolution that I’ve seen on Doctor Who yet. It was patronising, and it left the audience cold as a result. And, other than anything else, this was absolutely not the ending this trilogy deserved. At the end of Extremis we were anticipating that this trilogy would end with the Doctor finding a way to beat the Monks’ simulations in an incredibly exciting and unexpected way. Instead we got Bill projecting images of her mum onto a computer screen. We deserved better.