Warning: spoilers. If you haven’t seen The Lying Detective read on at your own certain peril.

Well, that was a twist. No, I’m not talking about that twist, but I’ll get to that, too. I’m talking about the one line uttered by Sherlock at the end of this episode that cast everything that happened before it in a completely different light: “I want you to kill me.” Lying, drug-addled and beaten, in hospital, with Culverton Smith arching vulture-like over him, Sherlock says something completely out of the blue: that he wants Culverton Smith to kill him. The explanation for this, as we found out, was that Sherlock’s pursuit of Smith was not about Smith at all, but about John Watson. He was following Mary’s orders and purposefully risking his life to spur John Watson into action and out of his melancholic state, to save John Watson.

It was Mrs Hudson who said it, in case it needed saying: Sherlock is fundamentally a creature of emotion. Everything, all of it, was about John. He teetered on the precipice of hell because Mary told him to, because he loved John Watson. The further we get into this show, the more that’s becoming clearer, no more than here—Sherlock may be a prodigious detective with extraordinary mental powers and unfailing command of logic, but he still put his life in danger for the sake of his friend. He still made a vow to protect John and Mary, and it still destroyed him that he failed to keep that vow. The contrast with his brother couldn’t be clearer. Mycroft says “People die, so what?” Sherlock says “Your life is not your own—keep your hands off it.”

I’m not sure I’m quite convinced by the convoluted reasoning Moffat engaged in such that he ended up with “Sherlock needs to literally risk his life to make John save him so John will recover from his grief over Mary”, but in any case it made for a captivating character piece about both Sherlock and John. It allowed us to see how crushed and wounded Sherlock was by Mary’s death and his own failure to save Mary. We saw a completely different side of Sherlock. We’ve seen Sherlock the prodigious detective. Here we saw Sherlock the penitent when he admitted he killed Mary and said John was entitled to take out his anger on him. We saw Sherlock the diminished and wasted, numbing his grief with drugs. We also saw Sherlock, fiercely loyal and loving friend to John and Mary, willing to die for both their sakes.

The character study of John was subtler, but equally as powerful. The motif of John’s hallucinations of Mary, talking to him, walking with him, reprimanding him, as if she were still there, potently conveyed the extent of John’s grief. It was a shock seeing her the first time, because the dialogue made it sound like she wasn’t actually dead, that she’d somehow faked her death. It made it that much more gut-wrenching, then, when you realise that it’s just John hallucinating. You feel deeply for the poor man. So to with John’s anger at Sherlock. John’s assaulting Sherlock in the mortuary was quite graphic, but it was powerful in visually conveying the pent-up, festering anger John harboured towards Sherlock. Maybe that’s why it was so emotionally gratifying to see John forgive Sherlock and admit he hadn’t killed Mary at the end. It was also really gratifying seeing John admit to his flirtation in the last episode and Sherlock helping John come to terms with it. That was an important and beautiful little character moment, and it’s a testament to how much both characters, and their relationship, have developed since they first met each other. 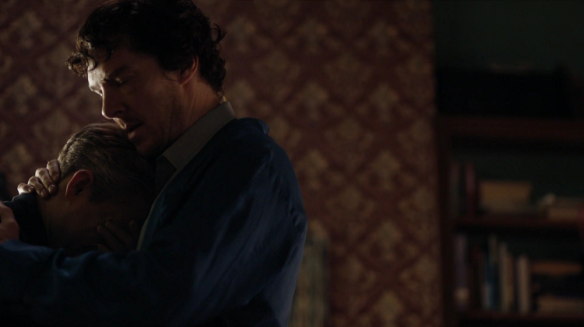 Although, as we find out close to the end of the episode, The Lying Detective is essentially a character piece about Sherlock and John, nonetheless it still excels as a detective story. Culverton Smith is a wonderfully creepy and slimy villain, played sublimely by Toby Jones. He completely exudes menace, and you’re left in no doubt that Sherlock is right when he insists that Smith is a serial killer. Sherlock’s obsessive fixation on Smith makes sense—until it doesn’t. It’s a credit to Moffat’s writing that he was able to turn the viewer so quickly and completely against the slimy Smith, but then make viewer doubt themselves by suggesting Sherlock, baked on drugs, had hallucinated everything that made him believe Smith was a serial killer. Which makes Sherlock’s vindication and defeat of Smith so much more satisfying. Although Cumberbatch delivered a masterclass of acting—some of his very best to date—to a great extent it was Toby Jones as Culverton Smith that made this episode so good, by making Culverton Smith as hateful and despicable, and as mesmerising, a villain as Augustus Magnussen and Moriarty.

Finally, let’s talk about what happened at the very end of the episode—the only thing the Sherlock fandom has been talking about all week. So Sherrinford is Euros, and Euros is Sherlock and Mycroft’s secret sister. Much praise to the writing and production team for so smoothly and seamlessly executing that twist, because I’m pretty sure very, very few of us saw that coming, although it’s funny to note how much alike “Faith” and John’s therapist actually look on a rewatch. As for theories about Euros? I’ve seen a few, but the only thing I’m convinced of is that something happened involving Euros in Sherlock’s childhood which traumatised Sherlock, but the memory of it and her he’s repressed—which is why Sherlock didn’t recognise Euros. He probably doesn’t even know he has a sister, because he’s repressed all memory of her. But whatever it is, it’s going to be interesting and I absolutely can’t wait to watch The Final Problem.